This is an excerpt of an original commentary piece which appears on MediaVillage.

Don’t worry, this is not a tech article. I am not going to explain AI and what it will take to pass the Turing Test.  We’re going to keep this simple. But I do want you to think of digital assistants, voice search and smart speakers/devices as the consumer-facing soft leading edge of artificial intelligence.

It’s not so scary (just a little frustrating right now) asking Alexa to play Nightmares on Wax. Or asking, “Hey Google, who played Starbuck on Battlestar Galactica?” Or asking Siri to lower the temperature to 72°.  It’s non-threatening, kind of fun and getting better all the time. We will slowly incorporate this convenience into our lives and before long we will wonder how we lived without it.

In case you haven’t noticed, there is an AI arms race going on. The big players are Amazon with Alexa, Google with Google Assistant, Apple with Siri, Microsoft with Cortana and Samsung with Bixby. Over eight of every 10 U.S. consumers are aware of them, and usage is on the rise. 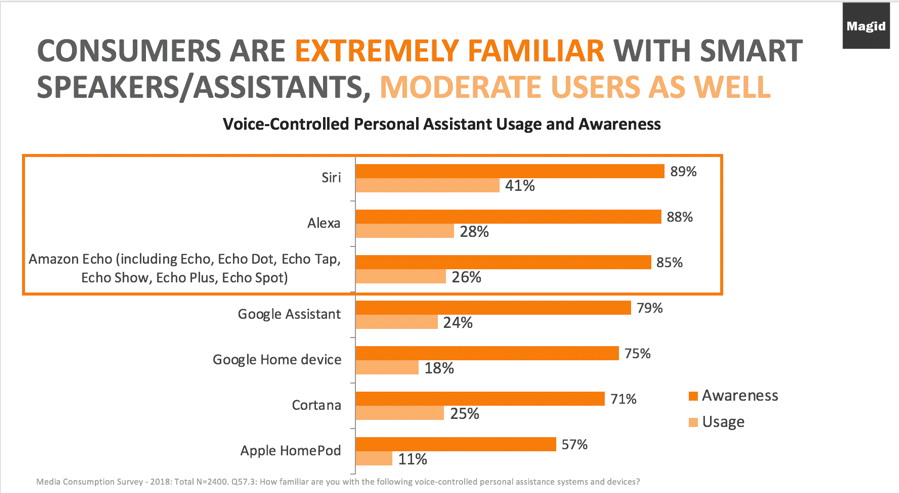 Whether voice assistants are simply resident on your smartphone or embodied in your home on a smart speaker capable of interacting with other smart devices, the fact that the primary interface of interaction is your voice is significant. Voice is a great interface — from the human side it’s low friction, intuitive and easy to use. As the AI side gets better at speech recognition and natural language processing — understanding context, intent and nuance — it will be the easiest way to interact in the digital world. There are projections that by 2020 half of all searches will be conducted by voice rather than typing (comScore). Magid’s own Mobile Lifestyle research found that 54% of mobile users in the U.S. use a voice assistant at least once a week, and 32% use it once a day or multiple times a day.

Let’s focus on the smart speakers for a moment — the closest thing we have right now that resembles what AI will emerge to be in the home setting of the future. With all the changes taking place in media and entertainment due to changing behaviors like bingeing, streaming and cord cutting, you may be wondering why you should care. After all, smart speakers are relatively nascent right now. 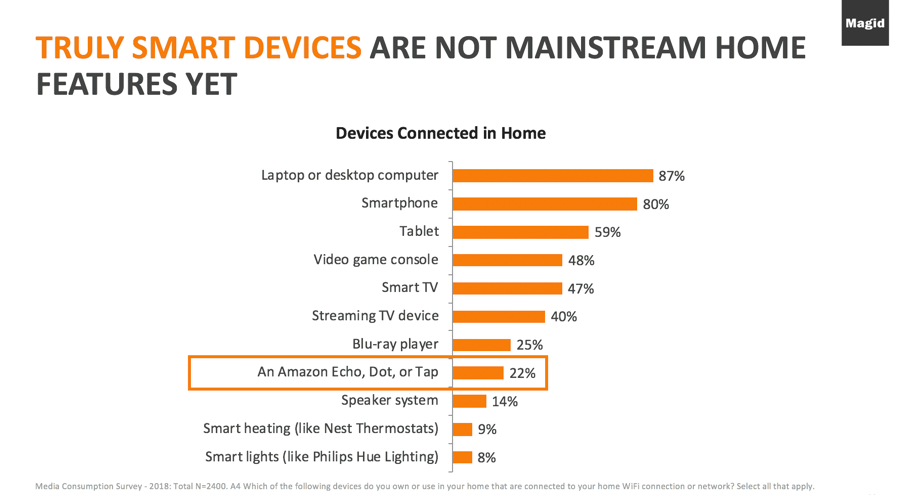 Read the remainder of the original commentary on MediaVillage.